This follows reports that some tax advisors are directing their expatriate clients to deregister with SARS to avoid paying tax on their non-exempt foreign income. According to Leon, this dangerous advice could result in a criminal act.

Section 10(1)(o)(ii) of the Income Tax Act provides an exemption to South African tax residents who are employees that render services outside South Africa on behalf of a South African or foreign employer for longer than 183 full days in any 12-month period, as well as a continuous period exceeding 60 full days outside the country.

Previously, these expatriates where able to fully exempt their foreign income earnings from taxation, provided they met the requirements. Those who did not would have their income taxed as usual.

However, the law was amended with effect from 1st March 2020. After that date, although all other provisions remain the same, only the first R1.25 million in income is exempt. Any earnings above this threshold are subject to full taxation by SARS.

“Some expatriates now face a notable reduction in their earnings and are looking for solutions to reduce or nullify this tax obligation,” says Leon. Unfortunately, this makes them susceptible to questionable advice.

Some tax advisors have directed their clients to simply deregister with SARS to avoid paying tax at all. According to the  Tax Administration Act, any South African earning local or foreign income must register as a taxpayer with SARS. To not do so is a criminal offence.

“If you deregister with SARS, this does not exempt you from being liable for tax. Your liability remains and you will eventually pay all outstanding tax on earnings during that period as well as penalties and interest you would have thought you had avoided,” says Leon. These taxpayers could also find themselves in court on charges of tax evasion.

However, advises Leon, there are two legal routes for which expatriate taxpayers may qualify.

The other is a Double Taxation Agreement. Expats working in one of the various foreign jurisdictions with which South Africa has a tax agreement may qualify for exemption from South African tax. However, there merely being a DTA in place does not automatically exempt one from being taxable in SA – very specific requirements must be met and provable.

“Either of these options can not only reduce one’s tax burden; they are also both legal,” says Leon.

Leon offers three tips to help taxpayers remain on the right side of the law.

First, apply common sense: if the solution sounds too good to be true, it probably is. Seek a second opinion.

Second, have your tax consultant give some form of guarantee. The quality of their advice will increase dramatically with their level of accountability.

Third, choose a tax practice with a strong legal component. One or more tax attorneys on site suggests its solutions are based on correct interpretation of South Africa’s complex tax laws.

“Above all, do not deregister for tax,” says Leon. “It will be cheaper in the end to find a better tax advisor.” 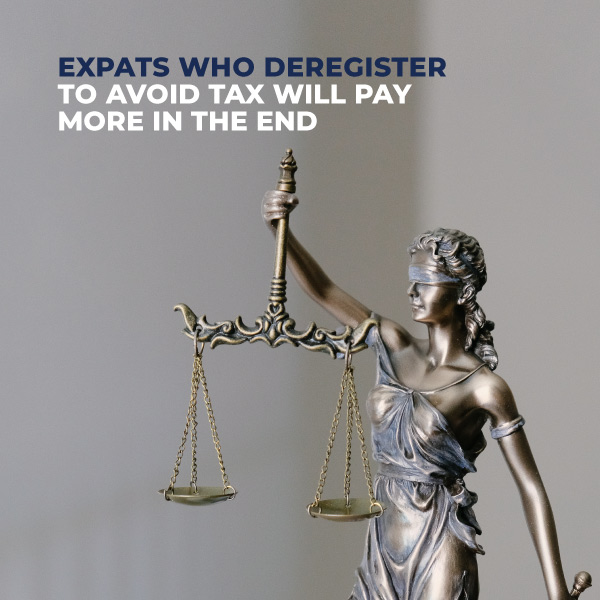 NEWS | THE SUPERYACHT INDUSTRY 101: WHAT YOU NEED TO GET THINGS STARTED